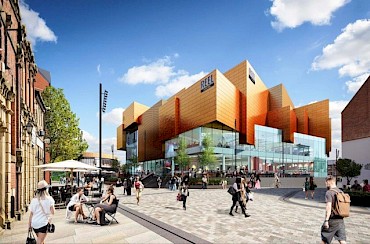 Rochdale’s new £60 million shopping and leisure centre is moving closer, with site investigations about to be completed, ready for building to begin later this year.

Workers carrying out the site investigations, which are now entering their final phase, are set to move onto the Rochdale market site in Smith Street in the next few weeks.

The official contractor for Rochdale Riverside, who will transform the site into an exciting new development of around 25 shops, including new Next and M&S stores, a Reel cinema and restaurants, is due to be formally appointed after the site investigation work is complete.

The market will be temporarily relocated to the area around Lord Square and the bottom of the Yorkshire Street, which has recently been repaved and had new attractive planters and benches installed.

The temporary market will close in its current site at the close of business on Saturday 16 September and re-open at its new location on Monday 18 September, so there will be no gap in trading.

A new permanent market, run by specialists Quarterbridge, is set to open on The Butts and in the former Santander building, alongside the re-opened river Roch, next Easter.

The timescale for the opening of the permanent market has been extended to allow the proposals to be improved. The council has carried out extensive survey work in the former Santander building and, following discussion with Quarterbridge, realised that the site has more potential than originally envisaged. Work to adapt and renovate the building will start in the next few weeks.

A small number of parking spaces will also be out of use on the Milton Street West and East car parks, as well as the bottom of Penn Street, while the site investigations take place. The work, which will start on Monday 4 September and last around four weeks, will be done in phases to minimise disruption, with around 20 spaces set be out of use across the car parks at any given time.