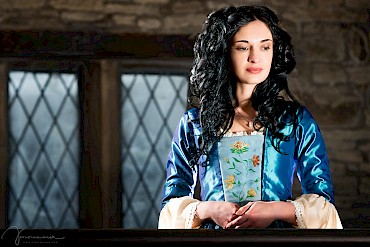 Sam, 29, wore an 18th century dress, from The Royal Exchange Theatre costume department, to fit in with the period building, which was built in 1710.

The Shippon in Ogden is a unique conversion of an old farm building that was renovated during the 1970s by Simon Roberts’ mother. The Shippon became an Arts, Crafts and Gift Centre, plus tea-rooms, which still retained all the original features. The Centre closed in 2005 and is currently not in use.

Greg said: “It was really enjoyable, but challenging.

"The hair was a 1700s style and they wore a lot of wigs then. I didn’t want to use a wig, as anyone can do that, so we used a lot of colour-matched hair extensions.

“The setting was this beautiful building, and ‘demure’ was the word of the day for the model, which just summed it up.”